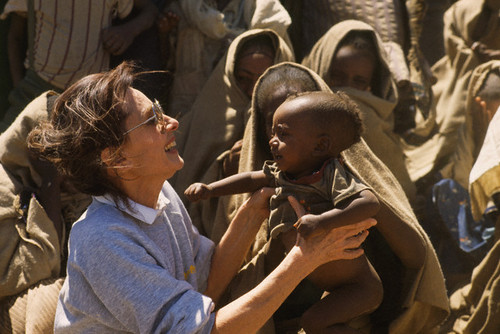 This short reflection is a response to some questions I was asked to consider for a recent college assignment as part of the diploma course I am undertaking with the Australian New Church College.

The questions were related to the concept of humanity and in exploring the qualities of someone that is renowned for their humanitarian work. The first question I find myself hearing is, ‘What does humanitarian mean?’

When I look in Google I find:

“Having concern for or helping to improve the welfare and happiness of people. Of or relating to ethical or theological humanitarianism. Pertaining to the saving of human lives or to the alleviation of suffering: a humanitarian crisis.”

So, one who is renowned for their humanitarian work is one in which their work is viewed as helping to improve welfare and happiness and saving human lives. When I hear the word ‘human’ I immediately think of the Lord’s love and wisdom in use… this is what the human form is. And obviously Jesus as the Lord is the ultimate example, both literally and figuratively, in His coming on earth to save the human race… to save that which is of His form.

My feeling is, that even if we are unable to identify that this is what the human form is and what it means to be human, that there is however an innate sense of that form in our minds that is simply a result of His essence flowing into our soul moment to moment – instilling in us an affection for qualities that demonstrate this. We see this confirmed in the spiritual principle that everything that exists in the natural landscape of this plane of life is, in fact, a result of a spiritual cause. So we naturally see, again both literally and figuratively, an inclination in human beings towards qualities in others that draw out the human form for us to behold, albeit a natural, external representative of this.

My daughter, Audrey, has been reading about Audrey Hepburn as she has been given a few books on her since she shares the same name. These books are aimed at children so we have read them together at bedtime. Granted they have presented in a very sweet and perhaps not always truthful way, which I discovered after having read deeper into her life, but they do however capture the general love the public seem to have for Audrey Hepburn.

She is graceful, beautiful but in an interesting way, and gentle. She speaks quietly but with assertiveness and she speaks with a clear articulation. Her face is clear and her eyes always seem to be wide and attentive. She is famous and well loved and known for her generosity of spirit and humbleness. And these are qualities just related to her work in Hollywood in the theatre and movies.

Added to that, once I started reading about her work with UNICEF, I found her described as tireless, compassionate and committed to the work above and beyond what was expected.

The announcement of Audrey’s appointment as the Special Ambassador for UNICEF was made on March 8, 1988. Although UNICEF officials would have been content if Audrey had functioned merely as a figurehead, that was never the case. “From the moment she signed on, she went into the field, meeting with the starving children whose message of despair she hoped to carry to the rest of the world. Completely hands-on in her approach, she raised the consciousness of millions of people about countries they never knew existed.”

She was portrayed as a woman who had a particular love for children and their struggles in poverty, having also had a taste of it in her own childhood.

As a starving child in Holland after World War II, the United Nations Relief and Rehabilitation Administration, the forerunner of UNICEF, brought her much-needed food, medicine, and clothing.

“There is a moral obligation,” she would say, “that those who have, should give to those who don’t.”

This last sentence to me particularly speaks of the way the Lord’s love works in us. What’s written here is a natural based response to the idea of charity … in the desire to give to others who are poor and needy. But in the spiritual life of our thoughts and affections, we are asked to take this a step further and be more discerning than just offering to those who have nothing. We are asked to acknowledge that is, in fact, our own self that has nothing and that it is our moral obligation to allow the Word as the Lord, His truth as His love, to flow into our being and allow it to affect us and move us to seek to apply it in our life. In this way we then become those who have nothing, allowing the Lord to give to us and in turn allows us to offer to others in our life, who also have nothing. By seeking to live by the Word’s truths we are thereby seeking to live in His love, which will mean that the way we offer to others is guided by spiritual charity and hence a moral application of truth. Spiritual charity allows His light to shine on the things that oppose our reception of Him and thus in this contrast, enhances our ability to see the Lord more fully. If we practice spiritual charity then what we offer to others in our life will be a moral charity too.

The love from which deeds are done is either heavenly or infernal.

The joining together then of his love and wisdom in use like this enables the human form to be made just that little bit deeper known yet again. This humbles us as we find ourselves in the presence of those qualities of the real humanitarian work, the work that saves human life from the things that oppose it; grace, beauty, quiet assertion, and clearer articulation.

We are moved by His mercy, by His generosity of spirit, the tireless way He offers again and again, the compassion and the commitment of that. To His continual ability to offer above and beyond what was expected. An increasing light and delight…

ADELAIDE A mobile Church service was held at the home of Randall and Pauline on 20th November, a shared meal was enjoyed after the service…