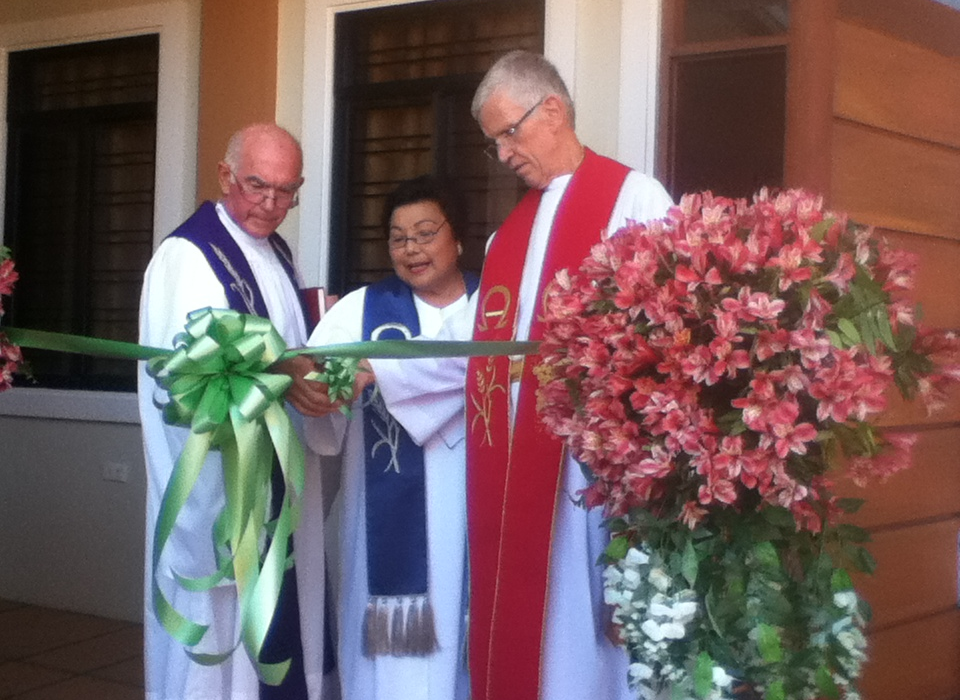 Rev. Ian Arnold and Rev. Trevor Moffat have been closely involved with the New Church in The Philippines for many years, going over there at least once a year. Ian and Trevor recently went over for the dedication of the new School building and the school graduation ceremony in March.

From the time of its founding in 2002 it has been the dream of those associated with it that one day our little Charity Day School in the Philippines would have it very own School building. This was the time when the late Freya King, wife of Bishop Louis King, saw an opportunity for the Church to reach out helpfully and usefully into the community

giving children – especially children from poorer families – the best possible start to their education. It was a triumvirate of her, her husband and the Rev Merlita Rogers. And thus the little School came into being.

Over the years since the School has been held in the Hall attached to the Church in Bataan, most recently 67 children in 3 classes held at different times over a long day and under the superb direction of Head Teacher, Veron Cayabyab. Since the Hall is not large and is also required for Church uses and purposes on different evenings and at weekends Veron and her assistants have done marvellously well. For us the tidying away of things, working in cramped and sometimes stiflingly hot conditions, would be tiresome. But they have never given a hint of it. It is so very much the Filipino way to roll uncomplainingly with what is and to happily get on with things.

With the School having gained an excellent reputation and with the strong encouragement of the local Education authorities to grow it, by 2007/2008 it was felt that the time had come to do just that. Consultations took place and following the successful application for a grant from The Asplundh Foundation a small corner lot, just 417 square metres, and a few doors down from the Church on the other side of the road, was purchased in 2010.

What followed was what we were determined would not be the hard part – the raising of the necessary funds to build a modest little School. Bergen Junge and Geraldo Gomes coordinated fund raising in the USA. Additionally, donations came in from individuals around Australia, also from Britain. And, pushing us over the limit was what has been described as a “jaw dropping” grant from The Homelands Trust in the U.K.

Scarcely more than a year ago designs were called for, an excellent one selected, and the contract signed with a local builder for a 2-classroom facility, also having a small office for Veron, washrooms and a shelter for parents waiting to collect their children.

That the building work proceeded as it did, to completion by early this year was as much due to Mr Franklin Rogers as anyone else. And so we have it, a beautiful little building, nestled neatly in one corner of the lot, allowing maximum space for a children’s playground, its two classrooms splendidly fitted out with cupboards, blackboards, book shelving, lovely art work around the walls and – yes – air conditioning!

It might have been that the building would be occupied in January. Veron would have loved that! But the need to see to small finishing jobs prevailed and led to the decision to hold its dedication and official opening in conjunction with this year’s Graduation.

On Thursday, March 27th, following the end of School year 8 a.m. “Baccalaureate Mass” in the Church everyone processed across to the School, children, parents, guests, visitors and clergy, assembling in the temporarily covered yard for a memorable opening ceremony which included flag raising, speeches, presentations, the cutting of the ribbon, some lovely dancing both by children and by parents  and the opportunity just to take in what a wonderful, well thought out and well-constructed building it is.

Twelve years on! Yes, dreams do come true. And as we repeated together, in unison, near the end of that opening ceremony, we give the Lord the glory.

But wait:  this, now, is our new dream. We paid what it additionally cost to have the building constructed so as to be able to take a second floor also consisting of two classrooms. In five years? Who knows? Already we have increased intake capacity to 120 children. Another two classrooms would open up the possibility of 240. That is amazing. But it is what dreams are all about – getting us to believe in possibilities when in the cold light of day, and falling back on our own limited view of things, we might retreat into thinking impossibilities.

“I tell you not to resist an evil person. Whoever slaps you on your right cheek, turn the other to him also. If anyone wants…