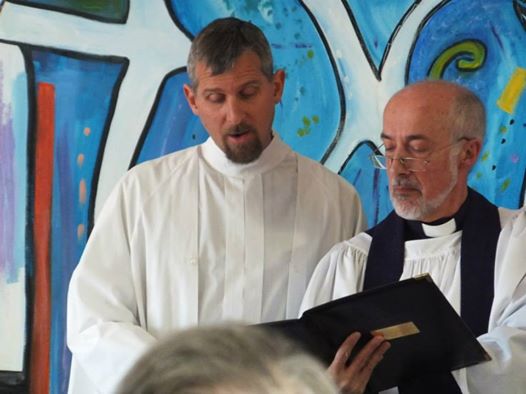 This was on Sunday June 29th in the Brisbane New Church, with members and friends and visitors present with Darren, his wife, Renee, and their children. There were around 90 there, including 30 children.

The friends in the Brisbane Society had organized a wonderful event to offer everybody and to show their obvious love, excitement and delight to now have Darren and his family to be their new and ordained Minister.

The back screens of the church were opened up to join church and hall openly together (perhaps a highly symbolic act!) but a necessary one in order to accommodate everyone and to allow the children to move and come and go as they needed. The children were excellent throughout the hour-long service.

Darren by nature is a gentle quiet person with a deep faith and integrity, and he may have felt that a simple ceremony would ‘do it’ but from his affection for absolutely everybody involved, really joined in the whole ceremonial occasion. It was a lovely continuity touch that he wore Les Sheppard’s robes, and was given Les’ stole at the moment of being ordained.

Rev. Julian Duckworth, President of The New Church in Australia, was in charge of the service and all the music was provided beautifully by the Brisbane organist, Allison Chambers. After an outline of the meaning of ministry and ordination, Julian asked Darren to give his personal testimony of faith which he most certainly did, quietly, sincerely and audibly, with his ever-present smile.

The ordination was made, and we joined in long applause which broke out spontaneously from everyone. Darren joined his family and Julian gave his address on ‘Serving the Lord with Gladness’ words from Psalm 100. He talked to the children about ‘serfs’ a very old word coming from the same word as ‘serving’ and demonstrated with Jacob Heldon how a Lord of the Manor and a Serf (a simple villager who worked for the Lord of the Manor) folded their hands over each other’s hands and made a promise to serve each other well. Then everyone in church had to do it in pairs, and they did. This, Julian told us, is how we and the Lord need to be too.

Before the end of the service which Darren closed with the Blessing, we sang again, this time using new words to the song ‘I Still Call Australia Home’ which were specially written and dedicated to all the Brunne family.

Everybody gave Darren and Renee a hug and their blessing, and then lunch was served and people relaxed into the enjoyment of the rest of the occasion. Ken Barns spoke of the delight felt in the Brisbane Society and around South East Queensland, of the twinge of sadness in knowing that Rev. Glenn Alden and Mary will soon be returning to America after two years of much work and much love in Brisbane with the Church. They were presented with two paintings and they spoke from their hearts to everyone.

Dessert was in the form of two large square highly-decorated cakes with words of greeting on them which when cut were shared around, and eaten quite repeatedly by most people. One of the lovely touches of the day was to see children absolutely everywhere, playing very naturally and unfazed by all ceremonies.

We all join in the celebration of such a historic event in the annals of the New Church in Australia and in particular for the Brisbane area and its people. May the Lord use the feelings of this one day to bring much fruit to the work that will be done in the years ahead, equally by the new Minister with the people joining him in it.

I was sent this link very recently, and I believe the newspaper issue in which it appeared is extremely recent. It features the Bryn…