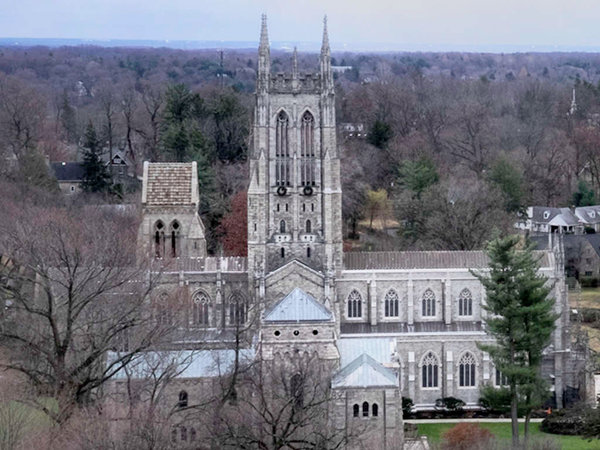 I was sent this link very recently, and I believe the newspaper issue in which it appeared is extremely recent. It features the Bryn Athyn Cathedral, a large gothic building with other nearby buildings which are all part of the whole General Church centre complex. The picture below appeared on the front page, along with the accompanying article.

…from the Philadelphia Inquirer, December 14th 2014.

Under a spotlight amid the medieval splendour of Bryn Athyn Cathedral’s pillars and vaulted ceilings, Brant Pitcairn last week practiced cradling what was supposed to be a box of frankincense.

“It’s a really great way to get into the Christmas spirit,” he said.

The towering cathedral is the spiritual and physical heart of Bryn Athyn, a Montgomery County borough of 1,300 that looks like a perfect picture-postcard of suburbia but actually reflects a fading image in modern America: the faith-based community. More than 90 percent of its residents are members of the General Church of the New Jerusalem – or the New Church – as were their parents, grandparents, and great-grandparents. Their town was founded in the 19th century as an enclave for followers to live among people who shared their Christian values.

They pride themselves on a culture of service and community, where everyone is on a first-name basis, most children go to local church-affiliated schools, and a passion for hockey brings folks out to cheer Bryn Athyn College’s team – even if their sons aren’t on the ice.

“For whatever reason, there’s just sort of an inborn knowledge that showing up for other people is a useful thing to do and it makes a difference,” said Kaye Lermitte, 58, a lifetime resident.

Kevin Hughes, chair of Villanova University’s humanities program, said such a community offers insight into a past way of life. “It really does speak to something I think we all crave but very few of us have an experience with,” he said.

One hundred and twenty-five years after the borough’s founding, economic and demographic challenges are causing the historically reserved borough to interact with the community in ways unthinkable even 20 years ago. Houses once passed down through families are being sold on the open market, allowing for the first time the possibility of an influx of outsiders into the 1.9-square-mile borough.

Bryn Athyn College, traditionally a school for New Church members, is welcoming students from other faiths. And North Philadelphians have begun regularly visiting Bryn Athyn’s rolling hills as a refuge from the city.

“I understand Bryn Athyn, how it looks today, will not look the same 50 years from now,” Mayor Kenneth Schauder said.

Tucked between Upper and Lower Moreland Townships, Bryn Athyn dates to 1889, when Philadelphia industrialist John Pitcairn bought the land to establish a community for the New Church.

The church considers the theological writings of 18th-century Swedish philosopher Emmanuel Swedenborg divinely inspired, and it was part of a larger movement in the United States that believed spirituality and science could coexist. Swedenborgians, as New Church members are sometimes called, were among members of 19th-century faiths such as Mormons and transcendentalists like Ralph Waldo Emerson who explored very different interpretations of Christian worship.

At the same time, America’s massive influx of immigrants had people looking to redefine community. “When you feel like the traditional markers of what established communities are beginning to be erased, then you’re looking for another way to define what a community is,” Hughes said.

Members of the New Church are traditional in some ways. Though they fully embrace modern life, there’s a focus on the sanctity of family and an exaltation of crafts like carpentry, masonry, and glass-making.

But they also believe that some of the Old Testament is parable, not historic fact, and that no single faith, including their own, has a monopoly on salvation. Living with kindness and service is far more important than adhering to any one doctrine.

Finished in 1919, the cathedral is a national historic landmark encrusted in detailed statuary and scripture carved in Greek, Latin, and Hebrew.

The international seat of the New Church, it shares a hillside with the Pitcairn family’s three castlelike mansions, built between 1889 and 1939. The family made a fortune in rail, oil, glass, and aviation, and was crucial in funding the town’s creation. John Pitcairn’s son Raymond was a successful businessman integral in designing the cathedral. Last week, Lermitte, who is Raymond Pitcairn’s granddaughter, walked amid the glowing stained glass and soaring towers of her grandparents’ nine-story home, Glencairn, and remembered her childhood there.

The family frequently opened the house to the community, and hosted Christmas concerts with professional brass musicians in a tradition that continues to this day. For decades, her grandmother Mildred would send gift boxes to every church member who had a baby.

“It’s not how much that you have, it’s what you give,” she said, recalling her family’s philosophy.

If the cathedral and mansions are symbols of tradition, the 130-acre college campus on the other side of Huntingdon Avenue is at the vanguard of change.

Bryn Athyn in recent years added dormitories, a 39,000-square-foot science and research building, and sought students from beyond the New Church.

Ten years ago, as much as 90 percent of its student body – which usually hovered around 140 – came from the New Church, said Allen Bedford, dean of academics.

But shrinking families and a dwindling enrollment from church members forced its directors to rethink the future. Today, the number of students has grown to 267, and an estimated 60 percent come from other religious backgrounds. The school is aiming for 400 students enrolled by 2017.

“It’s a little bit disruptive,” Bedford said. “People have to be willing to let go of some of the comfort of knowing everyone you see.”

The same goes in town, where a few years ago, a “For Sale” sign in Bryn Athyn was unheard of.

The community maintained its religious identity in part because houses were handed down to children or bought and sold within the community, Schauder said. The average home value is estimated at $452,000, according to census figures, and nice homes with low taxes are valuable commodities in the area.

“That’s all part of the change that we’re seeing in 100 years,” Schauder said. “It’s the economics.”

Potential buyers aren’t influenced by the number of New Church members in town, said Etta Norton, a real estate agent with Quinn & Wilson who is handling the sale of a Colonial on South Avenue once owned by a Pitcairn.

“They don’t care,” she said. “I think the reputation is it’s a very accepting community.”

Some New Church members hope that by opening up Bryn Athyn the faith itself may grow. Though in the 19th century it was popular, the church today has only about 5,000 members in the United States. Others think that whether newcomers join the church or not, change in Bryn Athyn is welcome, and is in fact something Swedenborgian ideals should embrace.

“I think that faith is the foundation of Bryn Athyn,” Lermitte said. “I think how you practice that faith will always evolve and change, and I think that’s a good thing.”

With acknowledgements to the Philadelphia Inquirer

What the Words of the Dying Mean

A special webcast presentation of ‘Swedenborg and Life’ featuring bestselling Life After Life author, Dr. Raymond Moody, and members of his Research Into the…