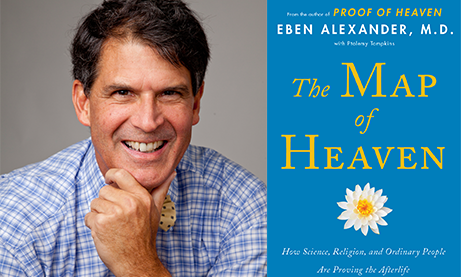 Many of you may already be familiar with Eben Alexander’s first and best-selling book “Proof of Heaven” in which he describes in great detail his personal experiences of continuing consciousness after the incontrovertible death of his brain.

Dr Alexander began as a dedicated neurosurgeon after years of training and preparation. He became highly thought of and an expert in his field of surgery. He had no thought that consciousness could or would continue on if the brain has stopped living or functioning, and he would have argued, he says, vehemently against the whole idea. 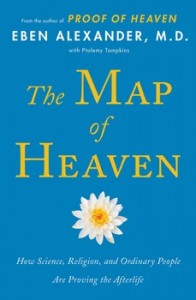 Until it happened to him during a sudden severe illness which shook him to the core because he saw, met and experienced events and beings after his brain died. This had such a profound effect on him that he could not deny the evidence of it and the certainty, for him, that consciousness continues on in powerful, new and beautiful ways after death.

This is all written about in his first book “Proof of Heaven” which has been a long best-seller. He has done many talks and tours on this subject in recent years.

The second book “The Map of Heaven” has just been published. It ranges far and wide – like any ‘map’ should – of very many people from antiquity to modern times who have put forward the idea of continuing consciousness. He introduces Swedenborg in roughly the middle of the book and later refers to him again several times, very positively.

It is probably best to give a short extract on Dr Alexander’s summary of Swedenborg and the afterlife. If you get the book, it is round about p62 onwards.

“Swedenborg had a particular interest in the brain and spent many years trying to isolate the seat of consciousness – the physical location of what, back in his time, was still called the soul. Then in the middle of his life, Swedenborg discovered (as the psychologist and Swedenborg scholar Wilson Van Dusen put it) that he had been ‘looking in the wrong place’. Swedenborg underwent a spiritual crisis. A series of terrifyingly vivid dreams finally led to a moment in which the heavens themselves seemed to open. Swedenborg’s old world cracked, buckled, and collapsed. A new one grew up in its place.

“Swedenborg devoted the rest of his life to studying and cataloguing the spiritual worlds he had discovered, with the rigour that he had previously devoted to studying the physical world.”

Then Dr Alexander goes on to outline Swedenborg’s understanding of these worlds and what they are, and where they are in relation to our sense of ourselves. He describes the familiarity of objects in the afterlife – there are trees! – and then he covers the all-important point that the laws of spiritual world life work rather differently than here. “The one rule we need to remember from here, however, is that we end up, in the end, where we belong, and we are led by the amount of love we have in us, for love is the essence of heaven. It is what it is made of.”

By all means, go and get yourself a copy of the book. It covers the afterlife extensively and shows the remarkable similarity of different peoples’ experiences and understanding of it. It is … a map of heaven.

In Google I Trust

When we first moved here, we obviously had no idea how to get around. Thankfully Erik Sandstrom had left behind a map book in…