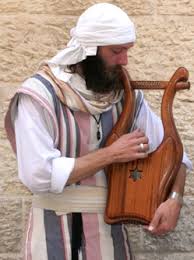 The harp of the Bible was called a ‘kinnor’. It was an instrument of 10 strings, hand held and gently plucked by the fingers of one hand as in the photo.

The word ‘kinnor’ has two possible origins. It might be linked with a close word ‘kannar’ which means ‘to call or attract attention’ or, more likely, this harp was seen to resemble the Sea of Galilee which in Hebrew is ‘Kinnereth’.

The kinnor or instrument of ten strings is mentioned 42 times in the Old Testament, the first time being in Genesis 4 v21. Far more well-known is the harp-playing of young David who was brought to the palace of Saul and played the harp to soothe him when Saul was afflicted by a harmful spirit from God – likely to have been pangs of conscience – and, on hearing the harp and David’s playing, Saul became refreshed and well.

This is the beauty of the harp as a musical instrument. Never loud, it has the carrying power of vibrating strings which penetrate the

It is this effect which makes the connection with the spiritual or personal meaning of a harp. Stringed instruments vibrate in a particular way and the twang of the string resonates with a similar vibration in other strings, building up more of a subtle sound than the one string would in isolation.

This is the world of harmonics, in which layers of vibrations build on each other, triggered by the first, making the musical note very rich and complex. If you listen very carefully, it is possible to hear other musical notes sounding in and with the main note.

So think about this on a personal and spiritual level. It’s exactly the same. We are beings who are full of associations and connections. If someone mentions the word “lowly” we know what it means – humble, not standing out as special – but there may be a large number of associations happening simultaneously in our mind – a look on a face, a person kneeling, a Christmas card, a simple meal we once shared in.

This is very soothing ‘music’ when it sounds in our heart, and brings us back from fears and doubts into faith and trust. So while David must have played wonderfully well on his harp, it is also the instrument of angels in heaven. No angel gets given a harp but the angelic mind and focus is on the glory of God, and the calm and confidence that trust in God brings to the whole of life. In that sense, angels themselves are the harps which resonate throughout the heavens.

We all know that we live in a society of victims. Everyone understands that rights go hand in hand with responsibilities. But as individuals,…