Read Genesis 4.1-16. This story is about the first murder, how Cain slew his brother Abel. It is told in sixteen verses yet its consequences are still going on, on a daily basis. As we read it, all sorts of questions arise: Up to now the Bible only mentions four people, so where did Cain find his wife? How could he later say ‘everyone meeting me will kill me’ if no other people existed.

The Bible is primarily concerned with individuals. What happens in human lives happens because people like you and me desire things, think about them, decide and do something to get them. Individuals are what God has to work with, in each heart, soul, strength and mind.

But wait a minute! Wasn’t the whole incident God’s own fault in the first place? Why did God prefer Abel’s offering and reject Cain’s? It seems so arbitrary. If we read more carefully we realise there was something unsound in Cain’s heart. Something was gnawing away in him. Was it jealousy, hatred, impatience? At the first provocation, when his offering was not accepted, it flared up and came into the open.

Cain was angry and his “faces” fell. In Hebrew it is plural because most of us have many faces – one when we are with our family, one at work, one when we are asking a favour, one when we get angry. God asked Cain, “Why has your anger been set ablaze and why are your faces fallen?”

One of my colleagues told me that he had recently met a married couple, and they seemed pleasant and charming. They mentioned their belief in God. But when the conversation turned to the subject of hell, their faces changed. They became hard and inflexible and seemed to gloat over the punishment of the wicked in hell. My friend was appalled to see this change. What happened to the gentle charming people he was talking to? Where did their anger spring from? It must have been present in them already. Is this the story of Cain all over again? Let us hope not; perhaps it was something they did not fully understand.

But how do any of us fill with such sudden anger? As we watch the news it becomes easy for us to take passionate sides against a person, a group of people, a gang of terrorists. Yet the Lord repeats to us, “Love the Lord your God and your neighbour as yourself”. It has always been so from the time of Cain to the present day and will continue to be until we, as individuals, begin to think more seriously. 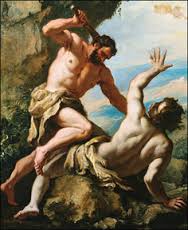 hat Cain and Abel may have been twins. The story doesn’t mention it, but it is an interesting insight as our teachings say that those two personalities correspond to the dual part of our nature: the shepherd and the grower, the inner affectionate part and the outer more intellectual part. Their work also illustrates this. The shepherd’s work is a daily routine. Livestock must be fed and watered every day, cared for and protected. This is the loving character, which takes no holidays from its daily routine. We see why the Lord is the Good Shepherd, for love never ceases to care.

The sower and harvester has long periods of rest, and so he has the opportunity to do other things, especially time to think. It is clear that humanity could not have evolved more civilisation until the shepherd or herdsman turned into an agriculturalist, until he had time to think, to plan, invent, build, and keep on improving and adopting new ideas.

Agriculture led to advance and so to wealth, power, pride, jealousy, dominion, conquest and warfare. Cain represents the stage in human history when these things started to develop. He was not rejected because God found any fault with his offering, but because of his inner state: smouldering with resentment.

Had Cain been humble at heart, he would not have taken it out on Abel, who clearly had done him no harm. He would have turned to God and asked, “Where have I done wrong? Why was my offering not acceptable to you? What can I do to put matters right?” That would have been the right thing to do.

Instead he blamed Abel and made plans to kill him. It was not done in a flare-up of passion but through a subterfuge. It was as if it had been on his mind some time, and he was just waiting. “Let’s go for a walk into the fields…”

Oh the thoughts that we can get sometimes. Are they a hint to us of what we are capable of doing if enough provocation arose? And when God asked Cain where Abel was, Cain replied, “I do not know – am I my brother’s keeper?” Notice the denial, the lack of remorse and the flung-away idea that his brother was his responsibility.

So we come to the curse of Cain. Notice that this “curse” did not come from God, as some kind of punishment, even though God said it, but it was the natural consequence of Cain’s action. When we deny or even exterminate the love that we carry within us, we are alone, fearful and unable to settle down.

But now the story takes yet another strange turn. Cain complains that this burden is too heavy for him to carry. He will not survive, as everybody will be out to get him. And suddenly God seems to soften, and places a mark upon Cain. This is not the same thing as the curse. It is the mark marking him out, so that no one is to do him any harm.

What this really means is that without our intelligence and our ability to understand the truth, we could never return to a state of intelligence and faith, and so come to have a sense of divine forgiveness and love. Here is the good news: If you have felt and understood the horror of Cain’s selfishness, the flaring up of his anger and his brutal deed, then through this understanding the Lord has given you the light that offers a way to self-examination and repentance. We have the ability to say, “Yes, I can be like that sometimes” – selfish, impatient, merciless, mad at the people around me if they do not see my point of view, or if they outshine me or do not recogni

The “mark of Cain” is part of the Lord’s mercy towards us. It is the indestructible part within us where the truth can shine in its own light as it receives love from the Lord, and changes our attitude. For the Lord knows no anger towards us but like a patient Father he wishes us to return to him, giving up our anger and jealousy, because in his eyes we are all equally loved and worthy of his love.

That charming and respectable couple my friend met upheld severe even endless punishment as part of divine nature. They had not understood the true love of God, in which even Cain, picturing our damaged humanity, was protected and kept safe until he could see and confess his sin and ask to be forgiven.

ADELAIDE The A.G.M. will be held on 20th March 2016 in the Church Hall after the service. Two motions will be introduced, 1, to…