Motion 2 In keeping with modernising our Church in the 21st century, a name change that will give a clearer impression of what we are. Adelaide New Christian Church Inc. being a suggestion. (The AGM decided on Adelaide Christian New Church).

Descendants of Rev. Edward George Day were in Adelaide staying with family for Christmas and as they had recently started a genealogy search, contacted the Church. June Johnson was able to give them much information concerning Rev. Day who from 1850 took over as Leader then Minister for the next 34 years. The family was delighted to see and photograph a wall plaque, pictures and other items.

Shirley Brock celebrated her 90th birthday in December. Shirley is the wife of Ian Brock, son of Rev Charles Brock.

Three members from Adelaide will be attending the upcoming N.C.I.A. assembly in Canberra, and we look forward to it.

Christmas seems a long time ago but it is still relevant to report on our activities. Christmas worship began with a musical service including advent songs and hymns played by Helmut Lopaczuk on the accordion. The following Sunday was a Toy Service with the toys being given to the Salvation Army. Our Lessons and Carols service involved a number of the congregation including Rev. John Teed reading the final lesson from the first Chapter of John and then giving the blessing. Christmas morning was a highlight as we were privileged to have Rev David Moffat conduct worship and administer the Holy Supper. David, Pam with Alycia, Alex and Ebony were on a family visit to Melbourne. It was delightful also to have two overseas visitors staying with congregational families.

We are delighted for Elke & Klaus Drevermann on the birth of a granddaughter, Alyssa, a sister to Emily. Graeme Scoble has stepped down as organist at Mt. Waverley after many years. A set of CDs, plus music sourced in other ways, are being used for hymn singing most Sundays. 28th February was a special day with the service conducted by Rev. Ian Arnold from Brisbane including the Holy Supper and the baptism of Charlie Francis, second son of Linda & Michael and another grandson for Neville & Alexis Jarvis. Following the service members and friends joined the Francis family for a light lunch in the hall.

20th March was a busy day for us with Palm Sunday, Harvest and our Annual General Meeting. We welcomed Judy & Len Robinson from Ballarat and greatly appreciated Judy’s leading of the worship. The fruit and non-perishable food brought by the congregation made a lovely display and was subsequently donated to the Salvation Army. During the service Helmut Lopaczuk declared his faith in the Sacred Scriptures and the teachings of the New Church as part of his commitment on becoming a member.

Following the service the AGM was held. After the administrative matters had been dealt with a proposal was put forward from the Board that we trial holding Services of Worship on the 1st and 3rd Sundays of the month only with an alternative activity on any 5th Sunday. Should a major Christian festival fall on a 2nd or 4th Sunday, a special service would be held. It was recognised that continuing with weekly services was putting too great a burden on our two Worship Leaders, Karl Robinson and Neville Jarvis, and this was the main reason for the change. The proposal was agreed to.

Just before Easter, Margaret Parker fell and broke her right ankle in 2 places. She’s now recovering in hospital and we wish her a speedy rehabilitation.

Numbers were swelled at our Good Friday service, led by Karl Robinson, with a visit by members of the Melbourne Unity Church including its Minister, Rev. William Livingston. Rev Chris Skinner used to give talks on Swedenborg’s teachings to this group. Neville Jarvis led the Easter Sunday service which was also well attended with some of our out-of-town members and other visitors attending.

Our Christmas service and following lunch was attended by around 60 adults and children. The Society then went into recess until the 1st Sunday in February. This Service was the last prior to Angus, Kaylene Glenn and children departing to America for an undetermined time. All will be missed at our Services and we look forward to the occasional visit . This year we were able to celebrate Easter Sunday with a good attendance.

The search for new premises is continuing without much success so far, however we are optimistic of securing premises which with some modifications will become our new Church.

All in the Brisbane Society trust everyone had a Holy, Happy, Joyful and safe Festive season.

A time of Celebrations – and Decisions
On Friday 11 March, a celebration of a very special sort was enjoyed by Rev. Richard and Gill Keyworth. Their continuing and faithful work, nurturing many children for over thirty years at Hope House, was recognised in a ceremony at Government House in Wellington. Gill and Richard along with other foster care providers received in recognition of their services to New Zealand, the Excellence in Foster Care Award. Each recipient was given their award by Lt Gen The Rt Hon Sir Jerry Mateparae, Governor-General of New Zealand, and Lady Janine Mateparae. This was all the more special as the Governor General is also the patron of Fostering Kids.

Richard and Gill had a wonderful time. The Keyworths enjoyed the opportunity to meet with and share stories of the remarkable work so faithfully and diligently carried out on behalf of some of the most vulnerable in our country. Imagine the narratives and expertise present at the ceremony and the extra celebratory events organised to honour the work and the workers, most of whom had been foster carers for 30 and 40 years. So quite rightly the recipients were feted. Flights to and from Wellington. Accommodation at a top hotel. Meals that were described by Rev Richard as “slap up” and very “posh”. Tours of Government House, Parliament and also the War Memorial Museum and the acclaimed Peter Jackson commemoration of the Great War. And then a ferry to Eastbourne before returning home to the family. And already there is a brand new baby. Richard said that Gill stood up and addressed the organisers at the gala dinner and said how she felt really appreciated for the work. It is wonderful to know that her effort and that of the others honoured at these events have been acknowledged and celebrated. We always hear about the children who fall through the cracks. Fortunately for some Gill and Richard have broken the fall and caught them with loving arms.

The Auckland Society celebrated Easter along with all the Christian Churches around the world. And like many churches it was a time also for people who are not regulars to come and share, reflect and rejoice in the Easter story. Easter Sunday is a special service for all and particularly the children. Rev. Richard Keyworth drew us altogether and retold the stories. There was a lovely model of the garden and the tomb. Real foliage and flowers spoke to both the physical and inward eye. How powerful simple representations are for both young and old. There was sadness and delight bound together as we considered our own personal place in the story and the Lord as our own personal Redeemer.

Several years ago I was in Brazil at this time and was surprised to see shops with Christmas Trees festooned with Easter bunnies. I am not sure whether it was a local or countrywide custom however I appeared to be the only person 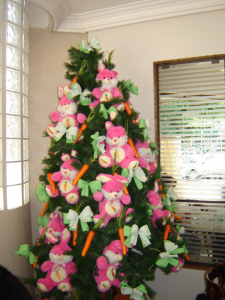 who was surprised and interested. The general feeling seemed to be about having a break from work. This seems to be the way of things now. Here in New Zealand we grab hold of those days with relish. Buy loads of Easter confectionery, plan to get away and complain about the shops being shut on Good Friday and Easter Sunday. Every year there is an outcry from those whose plastic money is melting in their pocket. Every year there is a strident call to repeal the legislation that protects and gives honour to our Holy Festival. Just like the rabble who wanted Barabbas instead of Christ. What is so great about our New Church understanding is the gift of understanding correspondences. It is sobering to consider how we are able to reflect on the “Barabbas and the mob in me” principle. We are reminded that it is easy to blame the rest of society for what we think is going wrong. Here in our Auckland Society we are gently reminded by our ministers (retired!) and each other in our sharing together gatherings that we are all still in the “work”.

Last Sunday we had a Harvest celebration. Again all the children shared in the lesson. Rev. John Sutton led this service and the children’s sermon resonated with the adults too as each person was served a hot roll freshly baked to savour using our senses. The warmth, the smell and the taste providing us with very tangible evidence of God’s provision. Rev. John led us through from seed to farmer to miller to baker to warm bread in the hand and the mouth. After the service a Ploughman’s Lunch was enjoyed. Sustenance again at the physical and spiritual level. How fortunate are the children to have these memories stored away for a day that requires them. The adults had time to learn from and contemplate- “As long as the earth endures, seedtime and harvest, cold and heat, summer and winter, day and night will never cease. (Genesis 8:22).

In May we are having a Special General Meeting to consider the next stage in the journey for the Ballarat Street Church. Our building is in need of repair. The question is whether or not to proceed. The difficulty in making this decision is linked to the future direction of the church and whether or not we remain on this site or sell the property and relocate or perhaps rent premises and use interest generated to fund a different approach to what “church” will look like in the next phase. This we understand is a situation with attendant questions and decision making processes that some other New Church congregations in Australia are also facing. The answer/s should emerge from our collective concerns, discussions and prayers. Is it a time for trepidation or excitement?

Going as far back as Christmas we had our Nativity and Gifts Service with 10 children taking part and two excellent adults on stage as well. The back garden Carols was a week later, with a good roll up.

The first Sunday in January was a service in which Linus Christopher was christened. He’s the second child of Joel Duckworth and Eva Iken – and Zoe’s younger brother. A lovely occasion for a lovely little boy. It was also his dad’s birthday.

Our Minister, Julian, became ill with an undiagnosed complaint so that services resuming in February showed some signs of physical difficulty. Julian knelt for the sacrament at the altar and only just managed to stand up again. This led to a period in hospital during which the Harvest service was celebrated with the help of many people in going to the markets, arranging the display, leading the service (thank you to Wayne Kasmar), packing the produce up and whizzing it to Mission Australia.

General Meeting of The New Church in Australia