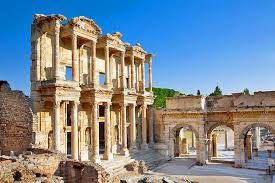 Ephesus is one of the few places mentioned in the Bible I can claim to have visited. Today the ancient city is a ruin, a mecca for tourists near the Turkish town of Selcuk, and 4 or 5 kilometres from the Mediterranean Sea. But in the days of the early church, it was a harbour city, one of the most influential in the region of Asia Minor, its skyline dominated by the large amphitheatre and the Temple of Artemis (Diana), one of the seven wonders of the ancient world. It is believed that the Apostle John is buried in the ruined church there that bears his name.

There is some controversy over whether the letter to the Ephesians was written by Paul as it claims and even whether Ephesus was its intended destination, as several important manuscripts do not include the name of the city at all. While such debates are interesting, they are only important if the book’s inclusion in the Bible is based upon who the author was. Of course, that is how many Biblical books were recognised as Divinely inspired by the Christian Church, and that leads conservative sections of the church to mount a vigorous defence of its authority. It’s not the only book of the Bible to be so questioned. For our purposes, it is sufficient to note the issue and move on.

The church in Ephesus seems to have been established by the Apostle John, who also wrote a letter to the church at Ephesus (Revelation 2:1-7). Paul also expended some time and energy enlarging it over a period of two or three years, as recorded in Acts 19 & 20. His success led to a riot, incited by craftsmen who were apparently losing business as a result (the demand for idols and pagan altars was drying up). Acts also tells us that when Paul left Ephesus and headed to Jerusalem, he fully expected to be imprisoned. On turning to the book itself, we see that Paul is indeed writing from prison (see 3:1, 4:1, 6:20), and he has sent his message by the hand of Tychicus (6:21-24), partly as a letter of recommendation and introduction.

The principal lesson I draw from Ephesians is simple enough. To a congregation converted from the many religious practices found within the city, Paul’s message is to remain committed to the cause. Abandon your former life, even though it is everywhere around you, even though there may be many pressures to return – social, economic, political. Put on the “new man” (4:17-24, see also 2:11-13, 3:8-13, 5:8-14,15-21). What is more, Paul’s urging is not merely to an intellectual or theoretical adherence to the faith. That would be a simple matter. It is to a living, thoroughgoing practice, with real world implications. He’s talking about basic principles of human integrity, not high theology. True faith must find expression in the daily life or else it is not genuine. It’s an interesting contrast we find here – Paul reiterates his message that salvation is a free gift from God, while insisting that real faith must challenge and change the way the believer lives (2:8-10, see also 4:25-32, 5:1-7).

The same is true of anyone who attempts to make a change for the better in their lives. When we commit to a better life, so much of what surrounds us actually calls us back to our old ways, and it can be a struggle to stay the course. Of course, it is our own inner nature which is the real enemy. We feel the attraction of old habits from within, and fixate on the things in our outer world which the mind believes will fill the void. Alcoholics Anonymous recognises this problem and recommends a complete severance of former associations as the only feasible solution. However, the Christians of Ephesus had no choice but to remain in their jobs, their families, their communities, and that is generally the case with most Christians today. Although some groups do urge followers to leave their families and their jobs, there is actually no Biblical precedent for doing so. Paul would have urged the Ephesians to shut up shop and ship out if that were the case.

The more controversial passages need to be read in this light. The Christian life was to be practiced within the context of existing relationships and responsibilities. Paul does not ask his readers to abandon them, but fulfil all their duties properly. So, when we read the obligations of marriage (5:22-33), he’s talking about the marriage standards of the day – everything should be carried out to the full extent of the believer’s ability, despite the real possibility that the spouse may not be a believer at all. What is true of married partners is also true of parents and children (6:1-4), servants and masters (6:5-9 – we might extend the same principle to the modern workplace: Christian belief may not change the nature of the work we do, but it certainly should change our attitudes to our bosses and the work itself).

On the other hand, there is no recommendation that we hold others accountable to our standards! Believers have committed their own lives to a spiritual way of life, but that places no such burden upon the life of another. That can be a difficult pill to swallow. Nevertheless, that is the demand placed upon us by the letter to the Ephesians.

ADELAIDE It was nice to catch up with our interstate friends at the Nunyara Retreat. Four members of the Adelaide Society were day visitors…