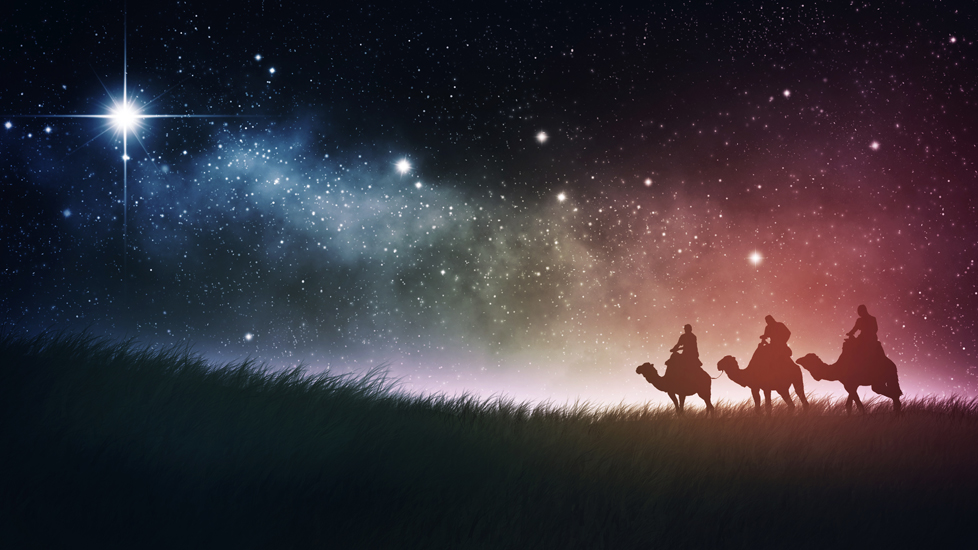 Even with God’s all-powerfulness, he could not have redeemed humanity unless he himself had become a human being. He could not have made his human nature a divine one unless it was first like a human being, first as an infant and then as a child. Later, that same nature in him needed to make itself a vessel and a dwelling place for his Father to enter, and he did this by fulfilling everything in the scriptures. The more he did this, the more he became united to his Father and the more his Father became united to him.Christmas could quite easily just become a season of giving. We give to those we love, and they give things to us. And of course, that’s good. There may be a kind of vague association that there’s a bit more to it than that, some memory of something religious behind it all, and of course, the scene of a baby lying in a manger which you still see quite a lot. But yes, Christmas could very easily become just a season for giving and thanking. And that would be a pity because something would have got lost along the way. I would love to jump forward about thirty years and take a look!
True Christianity 73

Christmas happened because of a problem. But before we look at that, let’s think about problems generally. They’re often a real nuisance but they can often be good for us, keep us alert, make us think and deal with them. I solved one problem yesterday. Our bathroom tap is dripping and plumbers aren’t going to come out just for that. And we can’t get inside the tap. So I put an empty ice cream tub in the sink and the garden will benefit. Problem kind of solved.

But there are harder problems… Syria, The Great Barrier Reef, assisted dying or euthanasia, and of course, there is human nature. And when we mention human nature we are getting very close to the reason for Christmas. If I had to find one word to use to describe human nature it would be “forgetfulness”. It wouldn’t be evil or sin or wrong or bad. It would just be “forgetfulness”. We can be so taken up with ourselves that we forget about other people. We can be so reactive or unthinking that we don’t realise how we affect other people and sometimes hurt them, and of course, like us, they have their human nature as well to contend with.

If you know the overall Bible story, it is basically a pattern of repeated forgetfulness. Forgetfulness of God and all his goodness. Go back to near the start. Cain killed his brother Abel out of jealousy because God preferred Abel’s gift to Cain’s. And in a flash, Cain forgot that both of them had given gifts to God and that that was good. You see this reflected in most families, where one child shows mum his special drawing and the other child comes up almost immediately and says, “Do you like mine? Which do you like best?” It’s an instinct but it’s really human nature. So, in the Bible, there is this pattern that goes on and on repeating. One day, read Psalm 78 and notice how many times they turn away from God. God is good to them. They forget it. God divides the Red Sea, they forget. God gives them manna and quails, they forget. God sends wrath and destruction on them. They come to their senses and then forget it. How much do you have to do to stop people forgetting and turning away? That is not the right question of course. The right question is: if people keep on forgetting how do you get it as good as it can be kept? And that is Christmas, God coming as a man, and the whole idea of redemption.

In Christianity there is an interesting kind of argument. It goes like this. People feel that Jesus has saved them by dying for them and they believe this. Some people’s lives are completely changed from then on. But some people give it all up after a while and that is called “backsliding”. And the argument is about whether having been saved by Jesus dying for us, can a person lose their salvation? Quite a lot of people say no, “once saved, always saved!” So it doesn’t matter what you are like, you’re saved. Others say that if someone backslides, then they were never saved in the first place. What do I think? I think that people should get a lot more understanding about human nature. It’s a repeating pattern. Go and read the Bible and you will soon see that. If we love God with all our heart, soul, mind and strength, wonderful, but we will keep on finding areas and tendencies about us which cause us problems. In fact, it’s because we love God that we start noticing these and then we need to manage them and deal with them, without the forgetting and with God’s help. But sometimes we will still forget…

So, the panorama of the situation at the time of the Lord’s birth. It’s quite graphic. The repeat pattern wasn’t just the same old repeat, like pulling up the chain of a cuckoo clock before it gets to the floor. The repeats had had effects and become serious. Winston Churchill once said about the imminence of the Second World War, “The lights are going out all over Europe.” It was something like that, then, before the Lord’s birth. The religious world was just an institution where people did things like sacrificing two turtle doves to be right again with God. They wouldn’t have known how that worked but they still did it because they had been told to.

And these people and those in charge died and went into the spiritual world with their idea that God had to be appeased with two turtle doves. These people weren’t bad people, they had just lost sight of the truth that you really get right with God in your own heart and then how you live your life. So there was a build-up on high in the afterlife of not knowing, until it became a critical point, and God knew (as only God can) that it was now the time for him to come.

Christmas – the Lord’s birth into this world – Christmas happened because of this problem. The thing to appreciate is that on the outside, the world didn’t look any different than usual. Of course, there was the Roman Empire but that wasn’t part of it, and they built incredibly good roads. The problem was all on the inside, in the general run of people’s minds and hearts not knowing and therefore not doing, apart from the occasional sacrifice, not confessing, not looking inside themselves, not repenting, not having a change of heart.

If we start trying to work out the mechanics of Christmas, about how God can come into the world as a person, we will tie ourselves up in knots. A child asks, Who was looking after the universe if God was here in the world? What a great question! And we answer, God can be everywhere all at once. And the child can’t get that yet, but one day he or she might get the idea of infinity. But quite a few grown ups are still struggling about things like the Virgin Birth and how some wise men could follow a moving star that stopped moving at Bethlehem. Stars don’t move, but you can follow them, but how do you know when you’re there?

The mechanics are hard and they put us off, and then there is the risk that we will not take it on trust and feel its truth and its enduring message that God comes where he is needed, including to us. You know, people sometimes say that the religious Christmas story is just that, a story, with a wonderful meaning which helps to keep us connected to God and being good. You don’t need to bother with whether it actually happened or not. I just don’t agree with that version of things.

If we take away the fact of Christmas as a historical event, we pull the carpet from under the whole of Christianity. We still have the story and the teachings of Jesus which inspire us, guide us and help us. But so does a Greek myth, or one of Aesop’s fables or a beautiful poem, but they do not have an event. Something you tell me might “save” me from making the same mistake but that isn’t my own salvation.

So let’s finish with the most important truth, not only about Christmas but about what God coming here in person, what it has brought about. Christians often wrap up everything in Jesus saving people by dying for us. We don’t quite do that. There’s also all the work during his life which is about this word “redemption”. If you redeem something, you pay it off. You recover ownership by making the agreed payment. Jesus did that, all the time. It’s a big subject. But basically, it’s the way he never once gave in to the pressures and suggestions going on inside his head. Being God, he could have snapped his fingers at them. Being Jesus the man, he had to meet and face them by himself. Being God in Jesus meant that they would have been excruciating, infinitely more than anything you or I ever get.

By doing this, living acutely mindfully, refusing to pick up the subtlest whiff of a mean thought, even though he felt its attraction, like turn these stones into bread and you’ll have proved it to everybody, by all this, Jesus conquered the darkness and set up the light. He holds it and holds hell at arms length, so that we are free, so that we can make our heart’s choices and know it is for real. It says,

“He saw that there was no man, and wondered there was no intercessor; therefore his own arm brought salvation and his own righteousness sustained him.”

We all know that we live in a society of victims. Everyone understands that rights go hand in hand with responsibilities. But as individuals,…