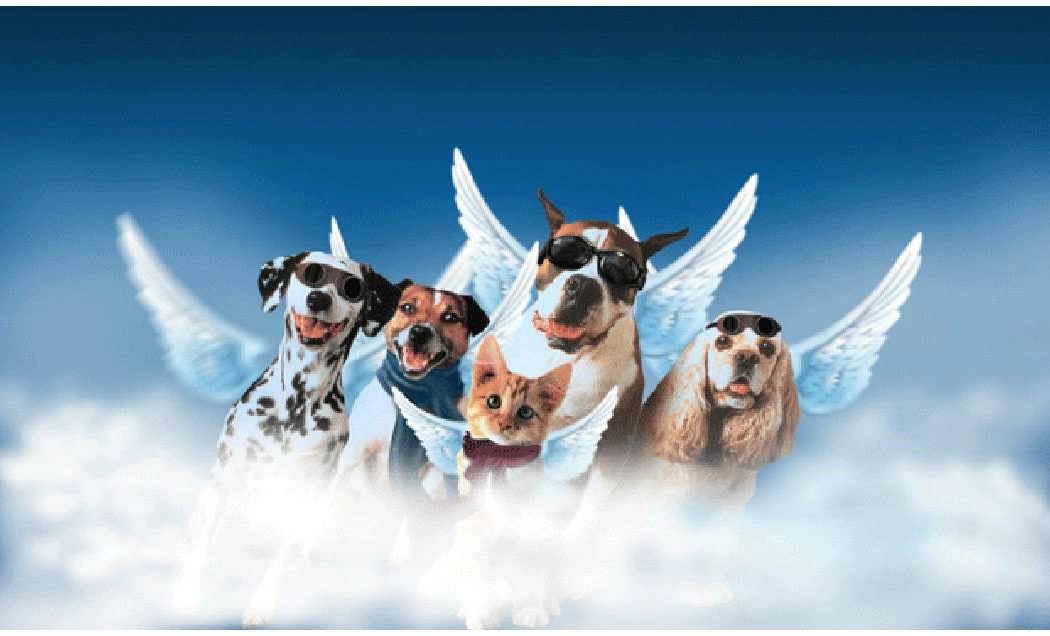 I would imagine that most of us have known someone who had an adorable pet and when the pet finally died, the person, the pet’s owner, was absolutely convinced that their pet was now in heaven, over in the spiritual world, still in existence and that one day, when the owner also died and went to heaven, the two of them would be re-united. This is an emotional wish and perhaps it is also an understandable need, and it is often backed up with supporting arguments.

The owner might say that their pet was almost human, that it always showed love to them as they did to it too. They may also add that their cat or dog was very sensitive to the state and mood of its owner and would often come and rub, or flop close by. They might also say that their particular pet had a very recognisable personality. And the bottom line would probably be that every living thing is from God and there is simply no reason not to think that, as with people, animals will not continue on living for ever in their spirit, in the next life. And sometimes, in amongst all this, is the suggestion that animals are in fact a lot better than or more advanced than “some of the people I know” and the inference is that such people shouldn’t really be allowed to carry on living after they die!

Pets are great. They provide companionship, they arouse affection and pleasure in a lot of people. Children can learn to care for a pet, and become very attached to it. In a real way, a cat or dog or rabbit is easier to be with than another person. They are less complicated, they live what they are like instinctively, and they are often devoted, trusting and even obedient.

Now let’s put all of this in a fuller context. If we are talking about the immortal lives of animals, how far down the chain would that apply? Would it be the future lot for every single mosquito, worm and amoeba to live for ever? There isn’t a problem with the size of the spiritual world because that isn’t spatial like planet earth; it can accommodate to receive an infinite number of beings in it and do so to all eternity. A more important question is about what the differences are between animals and people. We said earlier that animals behave according to their own nature, or instinctively, even though some of the higher animals can be trained (with rewards) not to behave only according to their own nature but become trained and obedient. People have their basic nature too which is called ’human nature’. This involves survival, self-awareness and focus, the need to love and be loved, and relationships.

But human nature is complicated by other things. We have language so we can communicate in great detail; we can gain knowledge and turn it towards original purposes. Most of all, we can think about thinking, and consider our own existence. We can conceive of God and we can form values and make choices between what we see as being good and evil, right and wrong. We also feel a freedom in all of these. All these allow us to develop and take up a particular course of life based on what we have come to believe. Even so, our human nature – our initial or lower nature – will still be there, but now it is known and understood and we can manage it and keep it under control.

In religious terms, this brings the idea of an eternal life and our immortality. God (whom we can conceive of) wants human beings to consciously receive his love and truth and for us to love and be true to God in return. This seems to set us apart from animals in a big way, even though our physical bodies and genetics have a huge amount in common with some animals. We are fundamentally different. Let’s bring in what Swedenborg offers us about all this. He consistently says that the whole reason for creation is to reach the point of there being conscious beings (people) who can take part in a relationship between God and themselves. Several times he says that the purpose of creation is to create a heaven of angels from the human race. The ideal is for us to become angels, but there is the permission that those people who reject God and live for themselves will be allowed to do so, and in fact, much prefer that to being obedient to God and caring about other people.

Swedenborg also regularly says that animals do not find themselves existing in the spiritual world because they haven’t made any personal choices because, unlike us, they don’t have freedom and reason. Here is one passage where he talks about this:

In people there is a connection with the Divine which can become a reciprocal response to God, and so people can never die because they have what is Divine implanted in them. Compare this to the thinking of people who compare people with animals, saying that they will not be alive after death any more than animals are. Such people do not take into consideration the fact that with animals there is no acceptance of the Divine or any acknowledgement of affection leading to a reciprocal response and joining to God. Nor do these people take into account the fact that, as the animal state is like this, the recipient forms of life which these possess are inevitably dissipated, for with animals that which flows into them passes through their organic forms into the world, where it comes to an end and melts away, never to make any return there. (Secrets of Heaven 5114)

One important thing that Swedenborg says about animals is that they each have their correspondences – a faithful dog, a cunning fox, a gentle lamb, a strong ox, and so on – and that in the way things appear in the spiritual world to portray the spiritual states, loves and intentions of angels and spirits, so animals of all kinds will manifest to symbolise these, including birds flying overhead.

So what then are these animals which appear? Are they spontaneous creations for that moment alone? Did they live before this moment and perhaps before they now appear in the spiritual world, in some pre- existence? Are they reconstructed from some almighty reservoir of life into which their souls went when they died on this earth? Or do animals simply transfer from earth to heaven without ever realising that they have moved on, and just continue being what they instinctively are?

There is one comforting idea to offer to pet-owners. When they themselves pass into the spiritual world, and let’s add, looking forward so much to seeing their beloved Maisie or Scamp once again, there is no reason why they shouldn’t be given that joy. Their pet may well come running up to them (which raises a few questions
) and to all intents and purposes Mrs Bridges has got Scamp – or Maisie – back again, and let’s hope they are very happy together, but let’s also hope that Mrs Bridges doesn’t spend much of eternity going round telling everybody, “I told you so!”

What Maisie or Scamp is made of and whether or not they existed in the intervening period is perhaps now rather irrelevant!

This article first appeared in the most recent issue of the “Candela” the quarterly periodical of the Swedenborg Association of Australia. Someone kindly suggested it would be helpful to be more widely circulated.

A booklet (35 pages) called “The Life in Animals and Plants” is an extract of material written by Swedenborg in one of his theological writings “Apocalypse Explained” in sections. This material is in the exposition of Chapter 19 of Revelation and has been produced by the Swedenborg Society in the UK, in 1981. It contains a much wider look at the life in animals and plants than merely the question of whether they are immortal or not. If you are interested, you can enquire through the Swedenborg Centre.

On a Sydney radio station 92.1 FM, dedicated to serve Sydney’s Islamic community, I heard an outstanding presentation on the injunction in the Qoran…