Around the land of Israel, in Biblical times, were groups of people who had dealings with the Israelites over many years. The big three were the Egyptians, the Assyrians and the Babylonians, each of whom had large empires which came and went often at the rise of one of the other two.

Each of these have their spiritual meaning for us. Egypt, with its great civilisation stands for knowledge we merely hold in our memory; Assyria represents our ability to reason about things and sometimes argue over them; Babylonia stands for self-love especially when it interferes with or opposes our love for God. 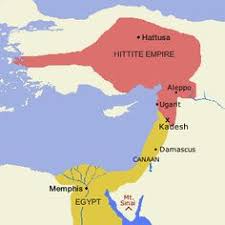 The Hittite Empire around 1500-1300 BC. Notice 1) how close it is to Canaan and 2) Notice the city of Kadesh on the border between the Hittites and the Egyptian empire.

Closer to home there were people who were related to the Israelites like Moab, Edom, Aram and Ammon, whose borders touched that of Israel.
These stand for various natural things we might call good but which can lead us astray from the real good which is that of the Lord. Then of course there were the Philistines whose main meaning is to have faith but no charity along with it. We call this faith-alone.

In among all of these were people called the Hittites and their meaning for us is basically that they represent a genuine simple good in life. Not very spiritual or religious but simply doing things according to what is right because that is what we should do as we live.

Here is just one passage from Swedenborg about them:

“The Hittites were among the better ones in Canaan, for Abraham dwelt among them and so did Isaac and Jacob and they were also buried among them. Later they were involved with David in several ways. And they (these Hittites) behaved themselves with piety and modesty towards these Israelites, so, by them, as by an upright nation, is represented the spiritual church and its truths.” (Heavenly Secrets 2913)

But who were they, those Hittites? They had an empire for about two hundred years based in modern-day Turkey which became large and powerful, and at one point the Hittites nearly defeated the Egyptians in the battle of Kadesh to the north of Syria.

They wrote in cuneiform or with wedges pressed into clay which they took from the Assyrians, and for well over a thousand years, their language was a mystery. In 1875 A Czech scholar looked at this strange writing and worked out what each group of wedges said. He came up with the fact that our word ‘eat’ was ‘ezzan’ in Hittite (notice the closeness) and that ‘vadar’ was their word for… yes, water. And he put all the pieces together.

Not everybody is interested in ancient history of course, but these Hittites, being part of the Bible, bring us something which is relevant to our faith and our life.

We have already seen that they represent a simple goodness in life. We can describe this being the wish to do what needs to be done, to do your tasks well, to feel respect and affection for other people, to help and be kind, to obey your masters, and so on. On a very ordinary practical level this would be a life well-lived, whether religion is part of it or not. Many people try to live up to such an ideal, realising that it is the best way to be.

New Church teachings say that all those who live good lives unselfishly can be and surely will be led to be part of heaven after they die. And if they had no religion in this life, they can be led to understand that there is the Lord God who is over everything and that all good is from Him, even the good that we do which comes through us. And because they love what is good, they will gladly accept this.

That is one thing about the meaning of the Hittites. The other point is to do with people who profess to have a religious belief. Such a belief can only be real if it carries through into good actions, good thinking and good feelings. With these, faith can grow and flourish; without them, beliefs are being bottled up.

So these Hittites have a great place in being part of the Bible story and part of ancient history. They are worth knowing something about.

Some Recent and Different Swedenborg Books