“There was in the days of Herod the king of Judea, a certain priest named Zacharias……” (Luke chapter 1 verse 5)

from the Apocalypse Revealed 102

In the Bible there is the command “Be thou faithful even unto death”. This command has two levels of meaning. One is natural and the other is spiritual. The natural meaning is that to the end of our life we are not to lapse from being faithful to what we know is true and good, or what we know is commanded us by the Lord. The spiritual meaning of this command is that during our life we are to receive and acknowledge what is true until by adopting them and living by them anything that is untrue or contrary to them can then be removed and put away from us.

If you enjoy reading a good story, you probably know that an author does not normally put the main things that are going to happen too early on, but instead spends quite a bit of time setting the scene and introducing various people to you the reader. And this is often done so that you will become intrigued and wonder what is going to happen later on. Sometimes the plot doesn’t start happening until you are well into the book and you are familiar with everyone and in this way you are (to use a Christmas story word) “prepared”. Prepare ye the way of the Lord…

Something like this seems to happen with the Christmas story itself. The one we all know is the second chapter of Luke’s gospel, “And a decree went out from Caesar Augustus…” but really, it all starts way back, very near the beginning of chapter one which is the longest chapter by far in the whole of the New Testament, with eighty verses, and a great deal happens in its build-up before we get to chapter two and the birth of Jesus. 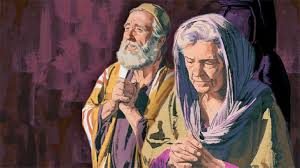 And strangely, it all begins with Jesus’ mother’s relative’s husband! “There was in the days of Herod king of Judea a certain priest called Zacharias.” Then we hear that his wife is Elizabeth. And then we hear that they have no child because Elizabeth is barren and now they are both old. And if you didn’t know, you might wonder where all this is going to go. It kind of begs you to keep reading to find out.

But then it says something which is tremendously important… that these two elderly people are very good people, righteous before God, who walk blamelessly in all the commandments of the Lord. So let’s put that idea more simply and say that they were both faithful.

The point is being made very emphatically that this faithfulness is the beginning of the gradual lead up into the eventual Christmas story. Two elderly faithful people who between them might have all sorts of questions about God’s dealings with them over many years, but no, they seem to have come through it, got over it, and chosen to be faithful to what they believe and what they do.

I have no doubt that we would all be able to identify with the helpful decision to remain faithful, especially during times when we feel we have missed out, or we are troubled about something, or however life seems to be treating us. Our determination is a large part of our wish to be as good as we can be, and in choosing it, we can cope with things more because we have made a decision and decisions are helpful. It involves being faithful to what we know and believe in.

We are not able to know how life is going to unfold for us or what might happen or not, rather like Zacharias and Elizabeth who had no child but they may have always looked forward, choosing to remain faithful to God in their service. I admire that a lot.

One of my fellow ministers said to me that he much preferred the idea of living life faithfully than getting into the idea of having faith. He said that being faithful involves us. Faith can be a bit of an awkward word and hard to put your finger on to say what it means. It’s a bit intellectual, a bit detached at times from the way you live your life. Sometimes, faith can be a list of all the beliefs of the church from A to Z. But not so with faithfulness. That asks us to be in it and use it and allow it to govern our lives.

In the Bible it says that faithfulness is one of the gifts of the Holy Spirit which comes to those who believe in God and put their trust in him. In the parable of the talents, the master praised the first two servants and said, “Well done, good and faithful servant!” Jesus talked about that ‘faithful servant’ whom his master made ruler over his house and added, “Blessed is that servant whom his master, when he comes, will find so doing.” That’s very expressive and the key to our genuine faithfulness. If you work in an office and get caught up in chat and idleness you are wasting the firm’s time, but if someone says the boss is coming round this morning, well, you look like you are busy because you want to keep your job but it is all pretence, and back you go to the chatting after he’s been round.

You can see where I am going with this of course. A faithful worker is the same all the time regardless of who drops in. We have the teaching about charity or love for others which points out that we are practising our love for others when we do whatever it is we do sincerely, faithfully, honestly and well. It is another way of putting the Biblical phrase, “Be thou faithful even unto death”.

Let’s go back to the unfolding story that will eventually become the Lord’s birth. It begins with this faithfulness. So we can make a kind of equation about it. If we are faithful to our belief in God and live by that, then the Lord will be able to be born in us, in our heart and mind and life. He will because we are preparing the ground for him to be able to do so. If we don’t bother being true to what we believe, or even more if we are unfaithful, we create a kind of personal mess or chaos, and the Lord won’t be able to be born into us because there is nothing he can get hold of. And the result will be that we won’t know a thing about God and how he works with us. This is no indictment on God, only a kind of judgment on ourselves. God hasn’t given up, we did.

Now let’s move on into the story of Zacharias. It is helpful and important to note that the name Zacharias means one who remembers God, or who stays true to God. There he is, doing his roster duty as priest, faithfully, and the angel Gabriel appears to him and tells him that his wife will have a son and you are to call his name John. Zacharias takes issue with Gabriel about the impossibility of this because of their old age. 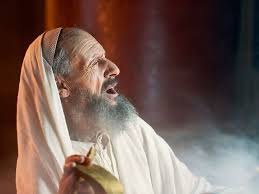 Gabriel tells Zacharias he will be unable to speak until all this happens. And much later on in the long unwinding story, Elizabeth has her son and all their friends and neighbours say that of course they will call him Zacharias in honour of his father. But Zacharias indicates he wants to write and they give him a writing tablet and he wrote that his name will be John. And suddenly he is able to speak again.

Why is Zacharias struck dumb until the birth? Looked at quickly it seems like a kind of punishment for disbelieving the word of the angel Gabriel! But as I often point out, God does not punish and neither do the angels of God. We might say that we can sometimes punish ourselves by the attitude we take, or from some wrong thing we do, but that is not God.

I think it goes like this. If you are someone who is faithful to God which means not only that you have your beliefs but that you also have your values and your spiritual feelings, then there are precious few people that you can really talk about those things with on a personal level. Maybe no one. We can talk about the weather and the cost of petrol happily for ages, but what we believe about God is private and from our experience we may have been given some strange looks. So we do not normally share it. If you have someone with whom you can comfortably talk about God and heaven and what to make of things in the Bible, then you are very fortunate. Such people are few and far between, more than ever in today’s world I suspect.

I heard a young lady years ago, someone pretty well up there in Sydney’s high life, say that when she seriously took up her own spiritual practice she very quickly found herself becoming what she called lonely. Her beliefs shut her away from her former jet-setting friends and they had nothing left in common.

Zacharias’ inability to speak could well be the same thing. Those friends and neighbours of theirs seem to be all too eager to tell them what their child ought to be called! Zacharias might have even been glad he couldn’t speak to them! But he asks for something to write on and writes ‘His name is John’ and the neighbours say they don’t know anyone who is called that, and immediately he can talk again. If you write something it is more permanent than spoken words and what Zacharias wrote made a break from the usual tradition into the world of what is new. And this is all part of the developing newness of what one carol calls ‘a new king born today’.

Here we are then today, well into this period of Advent which gives us the opportunity for preparation and reflection. In our own way we should all be struck dumb at times. Some things make me go very quiet – some of them are wonderful moments and some of them are atrocious beyond belief. Quietness and silence are the areas of our heart, yet we live in a culture of free and easy open banter. Go with you heart and your faithfulness with the developing story from Zacharias through to the manger and behold the birth of the Lord into this world and our personal world.

“And a decree went forth from Caesar Augustus that all the world should be registered……So all went to be registered, everyone to his own city. And Joseph also went up from Galilee.” (Luke chapter 2 verse 1, 3)

“Thus says the Lord who created you, and who formed you, Fear not: for I have redeemed you, I have called you by your…