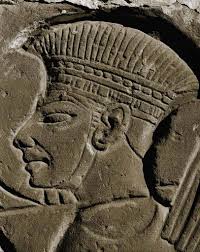 We’re continuing a series about those nations with whom the Israelites were involved in their long Old Testament history. The first one, in the previous issue of The New Age, was about the Hittites. This time we are looking at the Philistines.

First of all, in passing, note the similarity between the name Philistine and today’s Palestinians. There is no actual connection. They were and are totally different peoples. The Assyrians and then the ancient Greeks called the coastal area of Israel ‘Philistia’ and so did the Romans, and the name stuck. When the Arabs eventually settled in the region and became nationalistic, they took up the Roman name as their identity ‘Al Filistayun’, The Palestinians. 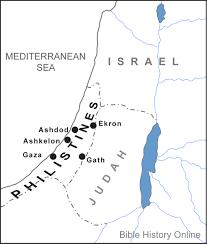 Who then were these Philistines? They are sometimes called the ‘Sea People’ (like others including the Phoenicians) as they seemed to have come across the Mediterranean Sea, probably from the Aegean Sea (between Greece and Turkey). It could be that, like the Hittites, they were Indo- European people. In the 12th century BC they came and settled on the southern coast of Canaan (today’s Gaza Strip) and quickly took over five cities, all of which are mentioned several times in the Bible – Gaza, Askelon, Ashdod, Ekron and Gath. (For a good example of these cities, look at I Samuel chapter 5).

There is no doubt that the Bible paints the Philistines as Israel’s most dangerous enemy. We would do well to note that, because of their overall spiritual meaning which we will look at later.

How much do they come in the Old Testament story? The answer is extensively, over much of Israel’s history. Their first mention is in Genesis 10 (the nations descending from Noah) where in verse 14 it says ‘the Casluhim (Cretans maybe) from whom came the Philistines.’ They are mentioned again in Genesis, in events, in Exodus, Joshua, much in Judges, especially in Samson’s story in chapters 13-16, in 1 and 2 Samuel many times, and a few times in 1 and 2 Kings which brings the Biblical history of Israel to an end.

Let’s put this another way. Who in the Bible had to contend with the Philistines? Abraham, Isaac, Samson, Samuel, Saul, David, Jonathan, and a king of Judah called Hezekiah. We get the picture; it is an almost constant tussle between them.

One of the main reasons for the continual struggle between Israel and the Philistines is that they were so near to Israel, just “over there”. The border between them almost didn’t exist. They were a constant menace. The Philistines were famous, too, for their ironwork which enabled them to have strong weapons. The Bible mentions how the Philistines subdued and overran Israel at times, necessitating Israel’s resistance to their rule. 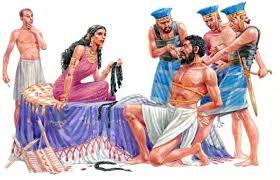 capture and return of the Ark, David and Goliath, and David’s grief when Saul and Jonathan are slain by the Philistines.

Let’s now look at the spiritual meaning of these Philistines, which makes their place in the Bible relevant to ourselves. They represent something called ‘faith-alone’ or faith without real charity, or faith which does not involve any personal repentance and regeneration. In other words, a faith which is seen to be sufficient by believing it, itself. This can take all kinds of forms. It can be seen in the belief that Jesus sacrificially died for our sins on the cross and we have to accept that to be saved. Or in the idea that we ourselves cannot do good but are sinful people (in need of Jesus’ sacrifice for us). On a more personal level, it can be that we are armed with much New Church teaching but it is in our mind rather than our heart and life. Or it is there in the righteous view we might have about ourselves and our critical view of many others. Or in our unwillingness to connect with our need of the Lord by not examining ourselves and not noticing our natural traits, patterns and impulses or habitual reactions. Or simply falling into the trap that other religions have got it all wrong.

Try not to see all the above as watertight. Understood in the right way, many of these beliefs hold their truth but when they become adamant and dogmatic, they veer towards faith-alone, faith not being lived or ‘owned’ by us. This is seen in the way the Philistines lived so close to Israel. There isn’t a boundary like a river or range of mountains between them. That pictures the danger of slipping without realising into some form of faith-alone. And if the truth be known, we all do that at times. Very often we are spiritually in a one to one combat between David and the Philistine ‘giant’, Goliath.

This is a sculpture found at Beth-Shean (Israel) 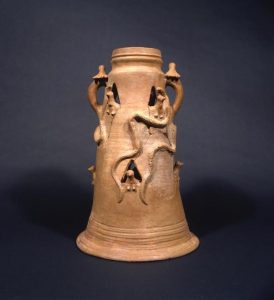 dating back to the 11th century BC, a time when the Philistines were both building up their own coastal territory and also beginning to make war with Israel. It is described as a cult-object by the Penn Museum’s section on Biblical and Near-Eastern artefacts in Pennsylvania USA.

One more mention of the Philistines in the Bible is right at the start of the Exodus from Egypt, where in Exodus 13 it refers to the fact that God did not let the children of Israel go the “quick way” (up the coast) but by the much longer way of the Red Sea, lest they meet up with the Philistines and become afraid and turn back to Egypt.

When we appreciate the spiritual representation of the Philistines being about faith-alone or faith with no charity, this action on God’s part makes a lot of sense when we see how the 40 years of wilderness wanderings changed them into a people experienced by hardships, led by Divine laws and commandments, who became – as we are intended to as well – the people of God. There is, you see, no ‘quick fix’ faith-alone route to get us to the Promised Land.

An Ordination Journey by Robin Wooldridge

A Mind and Body Festival, Birmingham, England, 1982. Among the stands cluttered with dream catchers, amethyst crystals, yoga books and colourful mandalas, I see…