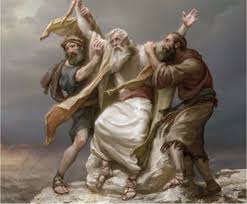 Unlike many of the other Biblical people with whom Israel had to deal, like the Hittites, Philistines, Egypt, Assyria and Babylon, the Amalekites were never a kingdom nor an empire. They were a tribe who populated the area to the south of Israel and were basically nomadic.

Who were they? Amalek, their original tribal chief was a grandson of Esau. This is stated in Esau’s genealogy in Genesis 36:12. In the story of Balaam, in Numbers 24:20, Balaam chants that 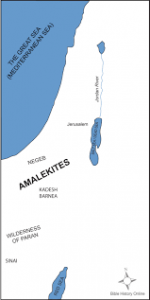 Amalek was “the first among the nations but his latter end shall be that he shall perish” which seems to suggest a great antiquity for them.
However, their Biblical intervention with the Israelites came during the wanderings through the wilderness, where in due time, the Amalekites overran them from surrounding hills and attacked the people at the rear of the march. These would have been the weak, the elderly, the frail, the ones struggling to keep going.

It was on this journey that Israelites came to Rephidim and made battle with Amalek. Joshua was put in charge and he saw how serious it would be. The Lord told Joshua to tell Moses to stand with his hands raised on a hill. When his hands were held up, Israel would be in the ascendancy, but if he lowered them, Amalek would be winning. But Moses’ hands grew tired, so Joshua told Aaron and Hur to go to Moses and hold his arms up, which they did, and won.
The Amalekites became a name for the archetypical enemy of Israel. Some later Jewish writers say that the Amalekites are any person or people who denounces the existence and holiness of the Lord. The great Biblical cry is to blot out the name of Amalek from remembrance because of what they did to Israel in the wilderness.

In Deuteronomy 25 the call is to remember what Amalek did to us and never to forget this. Later, this changes to the call to wipe out all remembrance of them to the point of not ever mentioning them or that a particular animal belonged to an Amalekite – in other words, to make out that they do not exist and they never have. To be an anathema.

The spiritual idea about the Amalekites is linked with all this. Because of their action of attacking the stragglers, it is quite easy to link them with the way the hells attempt to break and undermine us, especially when we are feeling week or afraid or, particularly, discouraged.

We experience discouragement from time to time because it is a part of the pattern of human life. We do well to understand that it is not our fault – which is often our first thought – but this alternation of our state is being fed by the hells coming at us from every side like the Amalekites did to Israel. Guerilla warfare.

And to blot out the name of Amalek is also helpful because in such a sorry state we should not be dwelling on it but trying to find our best way out of it by turning to the Lord to help us rather than finding reasons for it happening.

When King Saul lost the battle against the Philistines, he leaned upon his spear to end his life. A young man came to him. Saul asked, ‘Who are you?” He replied, I am an alien, an Amalekite.” Saul commanded him to kill him, for he was still alive, so the young man killed Saul and took his crown and brought it to King David, saying that Saul was dead. David asked him how he knew that Saul was dead. The man told him what had happened. David ordered one of his men to kill him because he had killed the Lord’s anointed one. And the Amalekite died. (2 Samuel 1:5-10)

Readings: Matthew 28.1-7 and Apocalypse Explained 400 This is a wonderful passage full of hope and of promises realised. Jesus when he was with…