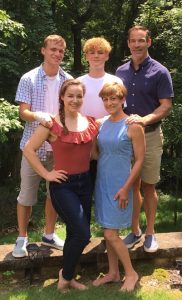 The Thompsons are a family of five, with Howard, Debra and their three children, Chelsea, Ben and Lance. They are from a part of Pennsylvania not that far from Bryn Athyn and the hub centre of the General Church, and this has significance. Howard was raised in the Episcopalian Church, equivalent to the Anglican Church, and Debra was raised as a Catholic.

Go back just over a decade and they were looking for high schooling changes for their daughter Chelsea. This led them to come across the General Church high school in Bryn Athyn and they became interested and impressed with its approach to education and behind that, to the spiritual teachings which it endorses. Their daughter Chelsea was enrolled. This led Howard and Debra to firm up a decision to join the organisation of the General Church, make it their religious base, and in time, for Howard to apply to become a minister (in American terms, a pastor; in General Church terms, a priest and member of the clergy.)

Several years of training followed, interestingly simultaneous with Todd Beiswenger’s training for ministry. At the end of this, Todd came out to Australia and Howard, along with Debra, Ben and Lance (Chelsea was working and stayed put) went to serve in the General Church society at Colchester, Essex, in England where they were for several years.

In 2016, due to the opening from the Sydney Society and also to UK visa timings, Howard made enquiries with Sydney and … the rest is history. The Thompsons came over in April 2017 and were offered the position before they left which they accepted. And now, wonderfully, they are here.

Howard, possibly among other things, has worked in insurance. He enjoys activities of different kinds but you would need to check what these are with him. Debra has worked with administration in the New York ballet which would have led to connections with the Sydney Opera House, and so on.

We all welcome them among us and wish that their work here in Australia is fulfilling and happy. To come from one culture and into another culture is pretty challenging, as the Thompsons have already experienced in England. It is often enriching. May the Lord go with them and be their guide.