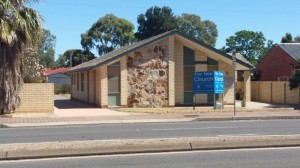 It was nice to see some faces in Church that had been absent for some time. Shirley Hussey was a welcome attendee, widow of our beloved Frank Hussey, now in the spiritual world.

Also Regina Jaugietis now well into her nineties came to the service accompanied by her carer, Anna and her three children. We hope to see more of them all.

Randall used a sermon downloaded from The New Church College website and we thank David Millar for having these available.

The neighbours alongside our Church have asked if they can have a swimming pool delivered by crane over the fence from Church grounds; Ken hopes our lawn will not be too damaged.

The AGM is scheduled for September 23rd following the service. 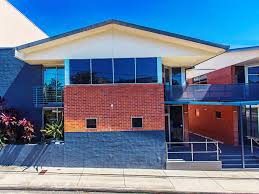 Our family services on the first Sunday of each month are continually well supported with the Reverend Brunne, over the last few months introducing and highlighting the inner meaning of the Adventures in the Apocalypse, being the seven deadly traps referring to in the inner meaning of the Seven Churches in Asia as we read in the early chapters of the Book of Revelation.

Over the past months two of our more mature members, Mrs Muriel Barrett and Mr John Sandow have had falls and both have back braces fitted. Another of our congregation Mr Doug Nash recently underwent a serious operation and from all reports had a successful outcome. We wish all three a speedy recovery.

Jordan Brunne, the eldest daughter of Darren and Renee left us in mid-August to attend college in Bryn Athyn where she initially enrolled in an Arts degree.

Recent visitors to Church are Cor, Sally and daughter Holly Visser-Marchant from Canberra who are in Queensland for a month house-sitting a property in the Gold Coast hinterland. Our Secretary, Gaye Heldon, spent around three weeks in the U.K. visiting family. Ruth Evans also had a quick visit to the U.K. late July.

Alexis, daughter of Paul and Ruth Evans is heading to Japan shortly with her Schools Orchestra, where she will be playing at various venues throughout Japan. Alex is a most accomplished cellist.

Brisbane New Church will hold its Annual General Meeting on the 21st October.

Our New Church Day celebrations this year consisted of our usual church service and a celebratory lunch.
During the service Rev. Trevor Moffat gave a children’s talk with aid of a diorama of the Holy City, which he prepared for the occasion. His presentation captured the interest of children and adults alike.

After the service we all enjoyed a shared lunch. The service and the lunch were held in our usual venue, an Environmental Education centre, which we hire on regular basis. It is set in natural bushland and it is very inspiring and wholly appropriate for services of worship. Trevor had baked a cake for the occasion and had largely undertaken the organization for the day. Thank you Trevor.

Although we are meeting in a lovely venue, there is the occasional hiccup. Last week we arrived early for the service and found the environmental group already there, complete with animals and food, even though the booking was ours. We hastily relocated to the home of one of our members. It worked out just fine!

Trevor and Joy have been away in the north of the State since just after New Church Day. During the first month or so they were working as volunteer rangers at Millstream Lake near the Fortescue River in Millsteam Chichester National Park in the Pilbara area. After that they will be moving to a cattle station where Joy will be supervising the children’s education and Trevor will be co-opted as a handyman/rouseabout/watch-this-space. They will be returning to us in October. While at Millstream we heard that they had been canoeing on the lake. Life is tough!!
Brandon Pisani has just celebrated his eighteenth birthday. Congratulations, Brandon. He is in his final year at school and is also working part time in a real estate office.

Brandon’s mother, Fleur, is in the final stages of chemotherapy treatment – not a pleasant experience. The overall outlook is good and she is looking forward to resuming her life as it was. She is always in our prayers.

Services for our group continue to be held on the first and third Sundays of the month, with the first service being conducted in a generally traditional way. For the present time the third Sunday service will be a workshop format facilitated by Sarah Walker who is undergoing studies under the guidance of the NCIA College.

The Aurora group have been joining us for services and they of course are very welcome.

We hope all of our friends are well and pray that our continent gets a reprieve from the big dry very soon. 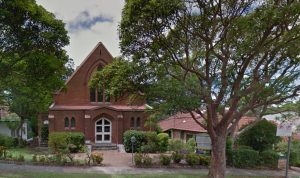 Well, the moment finally arrived when the Thompsons, Rev Howard, Debra and Lance arrived in Sydney on August 15th. Pretty tired after their long journey and from packing up their personal effects several weeks before, to be shipped here, arriving later in September. They have been staying in a delightful serviced apartment in Chatswood before moving into the manse and settling in there.
It is a lovely thing too that the Thompsons arrived soon after the Swedenborg Centre moved into the two front rooms of the building.

The Induction service was on Sunday September 2nd, led throughout by Rev David Moffat, the President of the New Church in Australia. A good number of people came for this occasion and the service went very well. The Sydney Society representative, Graham Hall, presented Howard for ministry of the church and promised our support and respect. Howard, with Debra and Lance nearby, was inducted, blessed, hugged and applauded.

A happy barbecue lunch followed, giving hopefully everybody present the opportunity to have at least a few minutes chat with the Thompsons.

David Moffat spoke with the children about the way he dresses when he cycles around Canberra and linked this with the way we need to be prepared properly when we get involved in living our lives.
David’s address started with a question: “Are you a pipe or a bucket?” He showed us in several ways – biblically, doctrinally, life-relatedly and really that the Lord wants us to be a pipe through which things can flow from the Lord through us and shared with the people around us.

In true Christian tradition, a resurrection has taken place at the church in Melbourne. Brought back from the dead by Mary Alden during her and Glenn’s stay with us earlier in the year, Alexis Jarvis has continued to roll back the stony door of silence leading to the hall, and filled it with the sound of chirpy children. Yes, the Sunday School has been resurrected on the first Sunday of the month. The children listen to Bible stories and undertake various associated activities which they afterwards proudly show to the adults present. ‘Moses in the bulrushes’ and the ‘Calling of Samuel’ were the focus for these months.

Rev. David Millar visited us from Adelaide over the first weekend in August. There was an open meeting on the Saturday afternoon when David ran a session on Logopraxis which stimulated much interest amongst those present. In the evening, David met with most of the Church Board members over dinner, enabling a wide-ranging discussion on church related topics and issues.

David also led our worship on the Sunday morning with 31 present including 7 children. David chose the Eli and Samuel story as the basis for his address on The Emerging New Church, without knowing that Alexis had chosen the same story for the children, a choice she made earlier in the year. Chance, coincidence or cosmic alignment? Hmm…

It was with considerable sadness that we heard the news of Adam Okienko’s passing into the spiritual world in late July after a long battle with cancer. Adam became a member of The New Church in Victoria in March 2006, although it is not known when and how he first came across Swedenborg’s writings and The New Church. In years gone by, Adam would on occasion, bring his two grandchildren with him to church so that they could participate in the Sunday School.

With our demographic firmly entrenching itself into the seasoned, senior citizen category, some of our members are coping with the bodily maintenance issues that go with the territory. However, we won’t dwell and in the sage counsel provided by those eminent philosophers Monty, Python and Co. “Always look on the bright side of life”, a philosophy followed by those that still manage to come to church, despite physical difficulties; always an uplifting sight to behold.

ADELAIDE It was nice to catch up with our interstate friends at the Nunyara Retreat. Four members of the Adelaide Society were day visitors and as our membership has declined in recent years it gave us confidence and the feeling of connectedness a boost. Our thoughts and prayers go out to those who suffered loss …

ADELAIDE CHRISTIAN NEW CHURCH REPORT The SA History month has been very worthwhile, even though at times perhaps a little slow. Around the Adelaide CBD there have been about 200 functions going on. For us, the most interesting, has been a Granddaughter of Rev. J T Deacon, Dalece, who was most delighted to see where …

ADELAIDE The sick list has been busy, Raymond Nicholls has had surgery for removal of his gall bladder and is now on the road to recovery. Meanwhile, June Johnson tripped down a concrete step and received two fractures in one foot. June resumed walking without crutches just in time to attend the Assembly. Four from …

ADELAIDE Services resumed in January and we used new technology for the first time.The Church has acquired an Apple TV and we accessed YYouTubeto watch a sermon by Rev.Todd Beiswenger, this worked well and we will use this resource from time to time.   Roslyn Taylor visited us from the USA during February and as …

ADELAIDE Our Church has now been finally repaired and restored to its original glory and was back in use for the service on 26th November. This re-opening was a special occasion as we were blessed with a visit from Rev. David Moffat who conducted the service with a sermon on “Judgement” and also performed a …

ADELAIDE We in Adelaide have been at a disadvantage in holding services since an out of control vehicle driven by an unlicensed driver crashed into the side of the Church building causing a wall to collapse and causing considerable damage. The Church is out of bounds for health and safety reasons and we have been holding …

ADELAIDE Some members of the Adelaide Church attended a reunion of the Holden, Darwin, Day and Ireland families on April 2nd. Dianne Roberts, gt/gt granddaughter of William Holden was the coordinator. Jacob Pitman and William Holden arrived here in 1838 and started the first New Church in the southern hemisphere. Roslyn Taylor enjoyed some time here …

ADELAIDE The AGM of the Adelaide Christian New Church will be held on March 12 th following the Service and a light luncheon. Ian Brock is a member of the Goolwa RSL and most importantly a war veteran from World War 2. Ian commemorated Remembrance Day on Nov.11 th at Goolwa. Another interesting facet to Ian’s life was …